"If that abyss and what it held were real, there is no hope. Then, all too truly, there lies upon this world of man a mocking and incredible shadow out of time."
―Nathaniel Wingate Peaslee

The Great Race of Yith are a sapient species originating from the dead planet Yith. They are called the Great Race because they are the only beings to have mastered time travel.

The Great Race are beings of enormous intellectual and psychic powers that once dwelt on the dying world of Yith. They escaped the destruction of their home planet by transferring their minds to the bodies of a species native to the Earth in the far distant past. They lived on this planet for 200 million years or so, in fierce competition with the Flying Polyps, until this enemy finally destroyed their civilization near the close of the Cretaceous era (about 65 million years ago).

In the bodies they inhabited on the Earth, they were tall and cone-shaped, rising to a point with four strange appendages – two terminating in claws, a third in a "trumpet", and the fourth, a yellow globe which functioned as a sensory organ. They have no genders and reproduce by spores instead. The unique ability of this scientifically-advanced race is to travel through time by swapping minds with creatures of another era. This allowed them to satisfy their interest in Human culture, science, and occult beliefs. Occupied beings' minds transferred to Yithian bodies against their will; these "captive minds" were queried by skilled inquisitors while the Yithians using their bodies learned as much as possible about the societies in which they dwelt.

Although captive minds were prisoners, they were nonetheless granted some freedoms in exchange for their cooperation. Those captive minds who cooperated with the Great Race were allowed to wander the Yithian cities at will and to browse the Yithians' gigantic library, which contained metallic tubes with scrolls that recorded the histories of uncounted alien races, including humanity. Creatures inside a Yithian body could also communicate with other captive minds from across our universe (and beyond). Once the Great Race had learned all they could from a captive mind, the occupied being's intellect was swapped back, with the additional precaution of erasing all knowledge of the Great Race.

Because the Great Race travelled to the future as well as the past, they foresaw their own destruction by the Flying Polyps. Before the fateful day, the Great Race transferred their best minds forward through time into the bodies of the "beetle folk" (the coleopterous race), Earth's dominant species after humankind. One of the factors involved may have been the fact that the Flying Polyps are completely gone by this point in time.

The Lost City of Pnakotus (also called the Library City, the Lost City of the Archives and Pnakotis) is located in Australia's Great Sandy Desert. This primordial city is where the Great Race housed their enormous library.

The library of Pnakotus held the Pnakotic Manuscripts, a legendary tome containing a detailed chronicle of the Great Race's history, among other things. Copies of this manuscript would later be passed down through the ages, eventually falling into the hands of sinister cults which would guard them into modern times. 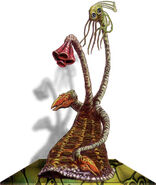