James Cameron's Avatar
Great Leonopteryxes, known as Toruk by the Na'vi, are extremely large draconic flying animals native to the moon of Pandora.

The Leonopteryx is carnivorous, feeding mainly on Mountain and Forest Banshees, and sometimes feed on ground animals such as Hexapede. It has no known threat from other creatures, and remains a solitary predator. 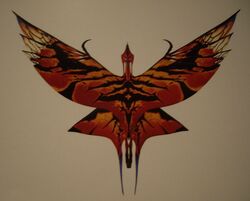 The Leonopteryx is closely related to the Banshee, with many similarities and differences. The Toruk is primarily colored red and yellow, with black stripes and blue crests on the top of the head and under its lower jaw. The crest on its head is razor sharp and can be used to injure or disembowel prey, or cut vegetation obstructing flight. The Leonopteryx also has a large brain cavity, flexible, membranous, wings stretched taut over a carbon fiber bone structure, powerful talons for grasping prey and perching, twin tails for flight control, flow-through ventilation for high performance, and large hooked claws. The Leonopteryx has powerful jaws which can open at a wide angle, capable of cleaving a Mountain Banshee in two. Despite their superior binocular vision, they are unable to see directly above them, most likely due to the very pronounced brow ridges above their eyes. Being the alpha predator of Pandora, this is not a problem for the Leonopteryx, as it has no need to watch for attackers. However, this weakness is exploited by Jake Sully, who jumps from his Ikran from above the unaware Leonopteryx and tames the ferocious beast.

The wingspan of the Leonopteryx is more than 24 meters. Its wings are composed of individual finned members that can separate to act as a slotted airfoil, or overlap and seal to form a solid surface. When separated they can rotate individually to induce or retard vortex formation. These finned members are not unlike the primary feathers of many terran birds.

The Leonopteryx are difficult to locate. This fact is exacerbated by the associated risk with trying to locate the resting place of such a massive, dangerous animal. However, some have been sighted in the Hallelujah Mountains. Members of the species mate for life and breed every two years. Primarily, the Toruk travels alone, and occasionally in pairs. However, they have never been observed in a swarm, or other high concentration.

Although Leonopteryx are wary of encountering their own kind, it is documented that a team of Avatars observed a battle between two Leonopteryx in the space of 3 hours. The battle ended when both fell to the forest floor from their mortal wounds and were believed to be dispatched by a large pack of Viperwolves.

The fierce beauty and nobility of the Leonopteryx gave the species a central place in Na'vi lore and culture. It is celebrated in dance, song, and with elaborate totems that symbolize both the fear and respect given to the creature. Indeed, the Leonopteryx is crucial to the Na'vi's sense of destiny and interconnectedness. This creature's name in Na'vi translates roughly to Last Shadow, as its preferred method of attack is from above. Therefore, the last thing its prey sees is its shadow. 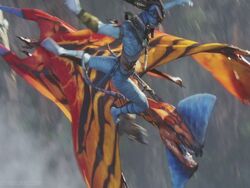 In the Na'vi culture, those who manage bonding with the Great Leonopteryx are given the title Toruk Makto. This means "rider of the last shadow". Toruk Makto is, to the Na'vi, a mythical hero who, during times of great sorrow, leads the people to victory. Neytiri tells Jake that all Na'vi know the story of Toruk Makto, which would explain why the tribe is instantly reverent of Jake when he returns to the Omaticaya, bonded to a Great Leonopteryx. At the time of Jake Sully's introduction to the Omaticaya, no Na'vi had accomplished this for four generations, and only five have ever managed the feat. Jake becomes the sixth person to bond with the creature, re-earning him the respect and trust of the Omaticaya Clan, who previously viewed him as a traitor. After the final battle against the RDA, Jake releases the Leonopteryx back into the wild, as the mythical Toruk Makto is no longer needed.