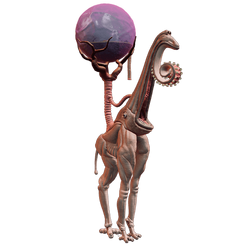 Eternal Cylinder
The Great Gaaahr is a desert-dwelling herbivore, and considerably the largest terrestrial creature found on its native planet. Their infant variant is the Infant Gaaarhling.

The Great Gaaahr is so enormous it dwarfs all other known animals around it, taller than most trees. The structure of the body resembles that of an Earth sauropod or giraffe-like animal, with an orb-like structure growing out of its own back. Upon first glance, it appears to be a small-headed creature with a long thick neck, but this is in fact a proboscis of the creature. Its true eyes are located near the connection between the neck and the body, with its mouth capable of peeling upwards in a curling motion to feed.

Its method of feeding is sometimes mistaken for a sudden standstorm, as it is a filter-feeder: sucking in large amounts of plant matter by inhaling through its large mouth. Numerous other objects are also swallowed, though these aren't digested. Its body is held upright by a gas-filled sac. This sac, which is filled with an atmosphere that is poisonous to Trebhum, is inhabited by a number of plant-like organisms that have a symbiotic relationship with the Gaaarh, such as organisms resembling pink eyes.

The Great Gaaahr drops pink bombs from its gas sac, annihilating things that are hit by them. It is unknown what these bombs really are, whether they are a defense mechanism, an organism from the gas sac, or parasites in the gas sac.

Great Gaaahrs are often ignorant of other animals and lifeforms thanks to their large size, and even then they are surprisingly placid and slow. Due to their size, they have to constantly migrate across the land for food, preferably odorous plants like Stenchleaves, but other matter can be taken as well. Despite this, it will avoid eating other animals unless they look or smell like the plants they eat; otherwise spitting them out if inhaled.