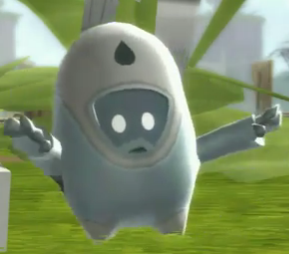 Graydians are Raydians that became enslaved by the Inky race in doing their bidding. This race, alongside the Blancs, no longer exist as they were returned to normal Radians.

All Graydians are the same in appearance, mainly as they all wear an egg-like suit, which converts much of their misery into an Ink-like substance for the Inkies to harvest from. Graydians are forced into misurable jobs, such as maintenance work and creation of new Inky soldiers.

Retrieved from "https://aliens.fandom.com/wiki/Graydian?oldid=169525"
Community content is available under CC-BY-SA unless otherwise noted.