Alien Species
Register
Don't have an account?
Sign In
Advertisement
in: Created Species, All Tomorrows Universe, Robotic Species,
and 13 more 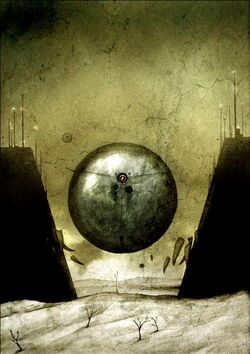 Virtually any planet and celestial object

None for 'later generation' Gravitals

Evolved/Created from the Ruin Haunters

Remade & Converted into the New Machines by the Asteromorph descendants

Nemo Ramjet
The Gravital were a robotic posthuman species that evolved from the Ruin Haunters.

Originally, the Gravital were highly sophisticated cyborgs, holding the brains of the Ruin Haunters within their chassis. However, extremely advanced quantum computer technology successfully allowed the Ruin Haunters to completely digitize their minds and dispose any organic remnants, thus making the Gravital a completely cybernethic species. Gravitals have been seen in a number of highly differentiated forms; albeit what appears to be their most common form is that of a smooth mechanical sphere, with a single red optic at its center, bearing three smaller, seemingly hollow holes beneath it, which may be speakers and/or other sensors. Other Gravital forms include a flat, wall-like form and a form that bears some resemblance to a spacecraft, with the wall-like monolith-esque form bearing a similar eye and sensor configuration as the spherical form.

While described as being able to reproduce, even forming 'families', such an action is obviously merely constructing a new Gravital, although it could entail an advanced and unique process of using the mind-programs of "parent" Gravitals for constructing the mind of their "offspring."

The Gravital are capable of manipulating gravitational fields to manipulate objects, and appear to fly through their very manipulation of gravity, but some have been seen with physical limbs, whether they be robotic tentacles or mechanical hands on spindly arms. Due to their entirely cybernetic nature, they are capable of surviving in virtually any environment.

The Gravital, like their organic predecessors, retain their delusion of being the sole heirs of Humanity's legacy. Their transition into mechanical beings created a species-wide belief that life was a privilege, not a right, and made them unable to understand that organic life was still life. Despite this, they retained a cohesive society like the Ruin Haunters before them, forming families, friendships, political alliances, and even religions. They saw other species as not life, but mere garbage to be disposed of or remade in their image, the way a modern Human would see an old electronic or other spent item. Planets were seen in a similar matter, with the destruction wrought on them by having their suns blocked out or their surface bombarded being seen like tearing down an old building to construct a new one. However, they also seemed intrigued by certain organics for unknown reasons, keeping the Bug Facers around as genetically modified Subjects for their own amusement, albeit seeing and treating them like toys or other objects. Initially keeping the isolationism of the Ruin Haunters, they turned to invasions after developing practical means of interstellar travel. Despite their initial apathy, some Gravital began understanding that life can be organic as well as mechanical, treating their organic Subjects better and managing to gain enough traction to operate publicly as the Tolerant, but such beliefs created a sharp divide in Gravital society, with the first practitioners of Tolerance being punished. Their starships and architecture have been known to be blocky, imposing, and monolithic, with some buildings bearing features such as towers topped with glowing lights.

The Gravital were one of the most technologically advanced species in the Milky Way, coming to match the Astermorphs. Their very bodies were a grand demonstration of their advancements, bearing a quantum computer holding their sapient consciousness, and despite usually having no visible engines or technology other than their optics, they are able to manipulate gravitational fields through a technology held within their bodies. They appear to have modified their very bodies to be able to travel throughout vast interstellar distances, and created blocky battleships that could do the same. They were capable of utilizing sail-like devices of gargantuan sizes to block out stars, and could manipulate asteroids into hitting planets, possibly through scaled-up versions of their own gravity manipulating technology.

Due to their knowledge about the Star People and the Qu, the Ruin Haunters were able to develop a civilization while other posthumans were still non-sapient animals. This gave them an edge that matched that of the Asteromorphs, but also led to them seeing themselves as the sole heirs of the Star People.

When the sun of their planet started to rapidly expand, there was nothing they could do to stop this. To save themselves, they built spherical, robotic bodies that floated and manipulated their environment through gravital manipulations. At first, those spheres still contained the brains of the Ruin Haunters, but later they were fully mechanical, becoming the Gravital.

But still, they retained their human dreams, human ambitions and human delusions of grandeur. Their artificial bodies made space travel easy for them, and they started colonizing other planets.

When the other posthumans, started by the Killer Folk and the Satyriacs, joined together into the Second Galactic Empire, the Gravital refused to communicate with them and stayed for themselves.

After long preparations, including developing better bodies capable of interstellar travel, the Gravital began to wipe out their posthuman cousins and all other organic life within about 10,000 years. They managed this through blocking their suns with million mile wide sails and, if that wasn't enough, finishing the worlds off via orbital bombardment.

They did all of this without fully realising the life of the other posthumans, having spent so much time without biological bodies that they were no longer capable of recognising biological life as what it is. So what was genocide to the other races was more akin to tearing down an abandoned building to the Gravitals.

The only biological species that survived the invasion were the Bug Facers, for reasons still not completely understood. They were one of the first to be attacked by the Gravitals, but they were left alive and redeveloped through genetic engineering into the Subjects.

There were some fractions in the Gravital empire which developed, through science, philosophy and religion, an understanding of universality of life and the common origin of organic and mechanical humanities. Initially, they lived in seclusion and created subjects that were allowed to do as the please, and eventually the movement gained enough momentum that it could be practiced openly without being punished. Some Gravitals even fell in love with their subjects.

The seething intolerance between the two factions finally broke when some Tolerant Machines wanted to set several worlds aside for the unrestricted development of biological life. All hell broke loose and the Machine Empire; the apparently seamless monolith of the galaxy, experienced its first short, bitter civil war.

Over a long time, the Gravital and the Asteromorphs nervously eyed each other. Both factions mostly kept for themselves, as the Asteromorphs inhabited the void while the Gravitals occupied the planets, but in almost every inhabitable system, the two Empires lived side by side and there was a strange tension between them, due to both sides knowing that they could destroy each other and whole planets and solar systems.

But in order to resolve the internal tensions created by the civil war, the Gravital Empire needed a common enemy to unite against, and the Asteromorphs were chosen as this enemy. The war spanned many million years and life (both biological and mechanical) was lost in numbers that let the Gravital's genocide look trivial. But in the end, despite huge losses, the Asteromorphs succeeded in nearly completely annihilating the Gravital.

After that, the Asteromorphs used the surviving Subjects to repopulate the planets and become true creator-gods for the worlds populated by their descendants. Albeit due to Gravital's abilities that the Asteromorph descendants deemed invaluable; they didn't completely destroy the Gravital. They completely disabled their gravity powers and their remaining populations remade and converted into the New Machines. They have existed as the second class citizens in the new empire.