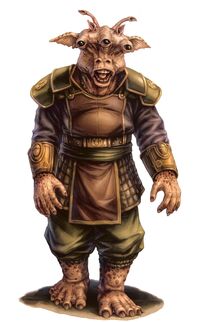 Star Wars
The Gran are a sapient mammalian species native to the planet Kinyen. They have been noted for establishing colonies on other planets such as Hok and Malastare.

Kinyenians can be easily identified by their three eye stalks and goat-like snout. Females have also been noted to have three breasts. Kinyenians also have the ability to sense one's emotions by changing skin color and body heat. Their vision is described as excellent, having the ability to not only resolve more colors than other species but also see in infrared. Kinyenians also have two stomachs used to help digest plants in the mountains of Kinyen such as Goatgrass. Kinyenians tend to eat rather slowly, savoring the taste by chewing and digesting it slowly. It can take up to a day to finish a meal but a Kinyenian won't need to eat for several days after that meal.

A genetic disorder among Kinyenians is abnormal swelling of the hands and feet. This swelling doesn't affect a Gran's physical abilities, but it's view by society, usually resulting in social isolation.

Given the large and open grasslands and highlands of Kinyen, the once primitive Kinyenians needed to band together to defend themselves against predatory animals. This resulted in the development of strong bonds between family and society for Kinyenians. Once civil, the Kinyenians created settlements for the carnivorous species that once threatened them.

Kinyenians are also very protective of their families, being one of the most devoted parents in the Galaxy. This was achieved through the Kinyenian's very powerful and sensitive sight, which have the ability to sense the emotions of their mates and children. Kinyenian society set up strict quotas to ensure that Kinyenians are educated in talents they are specialized in. Though looked down upon by other species, the Gran view this societal structure as logical and essential.

Kinyenians also had a strong need for companionship. A lack of companionship could leave a Gran insane, leaving an isolated individual vulnerable to bribery, drugs, liquor, and even death. Despite this, Kinyenians usually look for companionship among others of their kind yet are able to form strong bonds with other species. Kinyenians within their society were peaceful and amiable, with a keen sense of their place in society. In society, Kinyenians are unselfish and are willing to participate for the greater good for everyone as opposed to themselves.

With such close bonds, the Kinyenians formed small, individual cities concentrated to a fine area. Doing so prevented Kinyenians from losing contact with close relatives. These cities also hosted small governments controlled by a loose group of Kinyenian delegates of different aspects of society. A delegate is selected every three and a half years to become leader. This system proved to be effective due to the Kinyenian's peaceful nature. Hostilities between groups occurred early in Kinyen's history due to shortages in supplies and a need to survive.

The Kinyenians on Kinyen managed to live peacefully among one another for over ten millennia. Years later, the Kinyenians would colonize the planets Hok and Malastare, emigrating from Kinyen. The result would leave an improper balance in Kinyenian society on Kinyen.

The Kinyenian government of Kinyen would then impose isolationist policies and prohibit unauthorized emigration from Kinyen. This resulted in the Gran of Hok and Malastare to be isolated from their original homeworld. The Kinyenians stationed on the two planets would form strong bonds with their new homes and operated independently. However, a weak social code would result in an increase in corruption.

During the waning years of the Galactic Republic, the Kinyenians of Malastare held a great deal of power in the Galactic Senate. Notable senators included Aks Moe and Ask Aak.

When the Galactic Empire came into power, the Galactic Empire demanded access to all parts of Kinyen. The Kinyenians of Kinyen would then protest against the Empire which resulted in the Empire leveling part of Kinyen. This action would result in the Gran secretly supporting the Rebel Alliance during the Imperial era, but through peaceful manners such as offering a source of food. Most Kinyenians disapproved of violence, yet Rebel sympathizers insisted that no military actions were acceptable on their homeworld.

Retrieved from "https://aliens.fandom.com/wiki/Gran?oldid=184454"
Community content is available under CC-BY-SA unless otherwise noted.