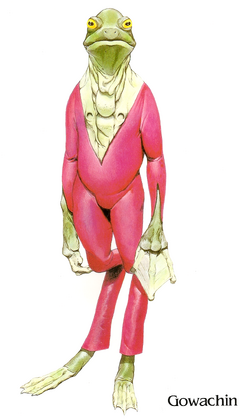 Gowachins are sapient beings from the planet Tandaloor located in an unknown galaxy somewhere in our universe, who take full part of the ConSentiency, a collective of sentient species. They are frog-like in physical appearance.

The Gowachin are organized into phylums, or extended clans. Through a unique custom, their phylum identification is tattooed onto their eyelids; one of the rituals of meeting another sentient is a long blink that clearly exposes the Gowachin's phylum identification to the other. Criminals are exiled from their phylum and subsequently are forced to have their tattoos burnt off. While the tattoos themselves are still visible as scars, the scars themselves are a mark of tremendous shame.

Gowachin young are born into a graluz, or indoor pool into which the tadpoles are birthed and live until their father tests them by swimming through the graz, eating those he can catch. This winnowing process is used to eliminate the slowest Gowachin who betray an insufficient desire for survival.

The Gowachin are generally a partriarchal oligarchy, with the elder male ruling the phylums while female Gowachin are sheltered and sequestered in the home. Status in Gowachin society comes from one's relative rank in the phylum as well as the phylum's overall reputation.

Gowachin regard their legal practices as the strongest evidence that they are civilized. Gowachin law is based upon the notion of a healthy disrespect for all laws; the purpose of this notion is to avoid the stulifying accretion of a body of laws and precedents that bind Gowachin mechanically. In a typical Gowachin trial, everything is on trail: every participant, including the judges; every law; even the foundational precept of Gowachin law. Legal concepts from other systems are often turned on their head: someone pronounced "innocent" (guilty in other terms) by the court is torn to pieces by angry spectators; judges may have bias ("if I can decided for my side, I will"), though not prejudice ("I will decide for my side, regardless"); defendant and plaintiff are chosen at the trial by the side bringing the complaint choosing on role or the other; torture is permitted; and all procedural rules may be violated, but only by finding conflict within procedural rules (an example of Nomic). Gowachin law is also illustrative of a dominant theme: that governments, law, and bureaucracy (collectively, society's tools for regulating itself) are dangerous when allowed to escape sapient control.

Jorj McKie is the only Human ever admitted to the Gowachin bar. His greatest and most admired legal victory in a Gowachin trial came when he demonstrated to the court that "eternal sloppiness was the price of liberty".

Retrieved from "https://aliens.fandom.com/wiki/Gowachin?oldid=182252"
Community content is available under CC-BY-SA unless otherwise noted.