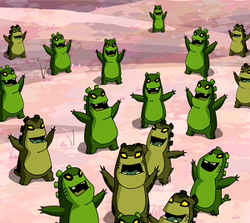 Ben 10
Gourmands are a species from the molten planet Peptos XII.

Gourmands are small, frog-like aliens with short stubby limbs, four-fingered hands, three-toed feet, six tubular growths on the back of their head, and three sets of gill-like markings on their face. There are three different types of Gourmands,[1] all of which have yellow eyes and at least three tongues.

The first is the Perk Gourmands, who are green all over with a darker shade of green on their foreheads, backs, and hands. They have crooked teeth that appear outside the top of their mouth, forming an over-bite.

The second is the Murk Gourmands, who are swampy-green with tan bellies and muzzles, black digits, and black-green spots on their tails, limbs, hips, and backs. Their teeth are more aligned with visibly sharp canine teeth that appear outside the bottom of their mouth, forming an under-bite.

The third is an unnamed race which their Queen belongs to. This subspecies is similar in appearance to a Perk Gourmand, but is much larger and has light green markings across their skin.

Besides the ones listed above, Gourmands can come in other colors. For example, Perk Gourmands from Dimension 23 have bluish-green skin and Mad Ben's Upchuck has skin resembling a Murk Gourmand's.

Gourmands do not have a natural predator because they are "at the top of the food chain".[1]

A Gourmand's four adhesive tongues can stretch to great lengths, allowing them to latch onto large objects and reel them in with relative ease. They are able to digest almost anything, including solid objects and organic matter all the way up to the Ascalon.[1]

After digesting something, Gourmands can spit glowing acid spheres that explode upon contact with considerable destructive power, which depends on the chemical composition and overall size of what they ate to create them.[2]

Gourmands can eat and spit out energy, such as lasers and the ultraviolet beams of a Crystalsapien.

Gourmands can use their tongues offensively to throw objects or grapple an opponent. They have proven to be strong enough to pull down Incursean warships and heavy machinery.

Gourmands can expel their breath downward in order to fly, using their belches like rocket thrusters and propelling themselves upwards. They can also survive in the vacuum of space.

Gourmands have great durability and stamina for their size, as they can withstand being hit by a car, skidding across a concrete road for a decent distance, and crashing through a brick wall.

Gourmands can spit out slime that is slippery to Arburian Pelarotas and can melt ice, such as that generated by a Necrofriggian.

Gourmands have a limit to how many big objects they can swallow at once.

Gourmands are slow when they eat a lot of things and become excessively fat. If they do not spit out anything they have eaten, they will remain fat and be rendered immobile until they spit it out.

There is a limit as to what types of energy a Gourmand can ingest, as the lasers fired by an Evolved Galvan can make them inflate into a ball.

Gourmands can temporarily be immobilized in ice, such as a Necrofriggian's ice breath.

Gourmands can be lifted by a species with as much strength as Sonorosians.

Gourmands cannot eat materials such as Kryptonite because it is not particularly hearty and just radioactive.[1]

Whenever they eat Celestialsapiens, Gourmands do not gain their cosmic powers in any form or way.[1]

Perk Gourmands and Murk Gourmands do not normally get along with each other, but will obey and protect their queen without question.

Generally speaking, Gourmands are not an aggressive race as their main thoughts revolve around eating. The mere mention of food is enough to distract Gourmands. Given the chance, a Gourmand will begin snacking on any kind of material in its vicinity.

Gourmands do not wear clothes because they are considered to be a primitive species that does not interact with other aliens.[1]

The Gourmands have a plan to eat their entire planet as a last resort during times of war, which can only be enforced by their Queen Rumbletum. Known as Plan Omega, their way of thinking is that a planet cannot be conquered if there is no planet to conquer.

The Gourmands have previously eaten Peptos I-X[3] as a result of Plan Omega. When the Incurseans attempts to invade Peptos XI, Plan Omega was executed for the eleventh time. The Gourmands currently live on Peptos XII. 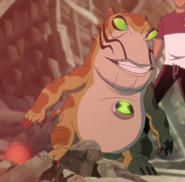 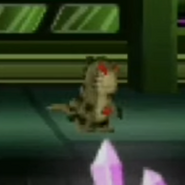 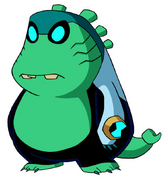 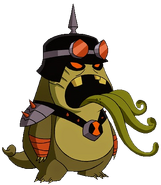 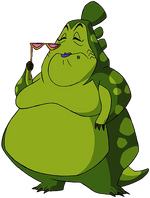 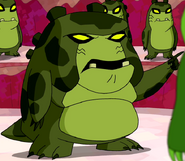 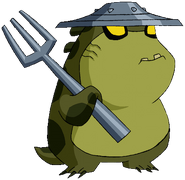 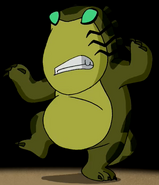 Murk Gourmand Actor
Add a photo to this gallery

Retrieved from "https://aliens.fandom.com/wiki/Gourmand?oldid=189936"
Community content is available under CC-BY-SA unless otherwise noted.