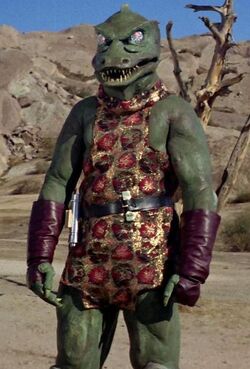 Wah Chang
The Gorn are a species of ectothermic, reptilianoid humanoid sapients with green, rubbery skin and an average height of approximately two meters. They are notable stronger than many humanoids, albeit slower and less agile but with greater stamina. As with most ectotherms, they prefer warmer temperatures, although their brains will likely addle at some heat point.

Some Humans have underestimated the Gorn because of a prejudicial opinion that all reptiles are less intelligent than mammals. This is an unwise belief, as Gorns are at least as intelligent as Humanity.

Their ears are simple holes in the side of their skulls, which may lead to a tympanic membrane such as that seen in lizards and frogs on Earth. Their mouths boast an impressive array of sharp teeth as well, indicating a carnivorous lifestyle, while the hands and feet both possess vicious claws.

It has been quipped that the Gorn are comparable to the Earth's extinct Velociraptor species, based on the Gorn's size and bite radius, although this is likely a misunderstanding, as velociraptors were only the size of turkeys; the likely intended comparison was another dromaeosaurid such as Deinonychus.

The eyes of the Gorn are of interest to some, as they come in two very different styles; most appear silvery and faceted much like the compound eyes of insects, while others have typical humanoid eyes complete with pupils. This may indicate that one or the other may be caused by technology. Both male and female Gorn with insectoid eyes have been observed, proving that the difference isn't caused by sexual dimorphism. It is extremely unlikely that they are subspecies of one another due to the massive difference here.

It is imperative to note that Gorns with humanoid eyes have only been observed in the Mirror Universe, and since Humans from the Mirror Universe have a genetic difference that makes their eyes more sensitive to light, it's possible that Mirror Gorns might have different types of eyes as well. Another possibility is that the insectoid eyes might actually be a nictitating membrane protecting their inner eyes from the bright desert sun. 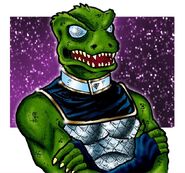 Slar, a Gorn from the Mirror Universe

A Gorn as they appear in Star Trek Online 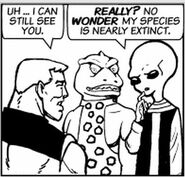 Gorn vs. Kirk (past and present)

The Gorn are a cruel and militaristic imperialistic race that rules another galaxy and attempts to invade and conquer the Milky Way Galaxy. In their home galaxy they enslaved or exterminated every race, and strip mined every world. Being masters of genetic engineering they possessed bio-mechanical weapons that combined technological and organic elements.

The Gorn Hegemony was conquered by the Klingons in the early 25th century. They formed a significant part of the military forces of the Klingon empire and some of their warship classes were adopted by the Klingon Defense Forces.

The Gorn Hegemony together with five other interstellar powers (Tholians, Romulans, Breen, Tzenkethi and Kinshaya) formed the Typhon Pact in the late 24th century after the Borg invasion of 2381. It was an alliance that stood in opposition against the Khitomer Accords, an interstellar alliance consisting of the United Federation of Planets and the Klingons, later joined by the Ferengi and the Cardassians.