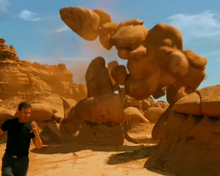 The Gorignak (Rock in the language of the Blue Demons) is a Biolithic species native to Epsilon Gorniar II.

These creatures are extremely violent, it is angered greatly by vibrations in the ground and sounds, so much so that it goes on a rampage when provoked in a significant manner. The creature seems at least partially sapient as it has some form of language, the only words known "Trakahau gra fuyter!", which means "Tranquility at last".

The Gorignak once towered over the mountains, but over the aeons the relentless forces of erostion wore them down to a faction of their original size.

Later when the forces of Sarris occupied the Protector II Fred Kwan would use the Digital Conveyer to bring one of these beasts (possibly the same Gorignak) onto the ship to attack a group of them. Ultimately the Gorignak was launched into space, where it found tranquility in the utter quietness free of any sound and vibration.

Retrieved from "https://aliens.fandom.com/wiki/Gorignak?oldid=173724"
Community content is available under CC-BY-SA unless otherwise noted.