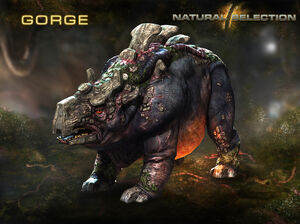 Natural Selection Universe
The Gorge is a bulbous and passive-aggressive subspecies of Kharaa. It can become playable during a match after using ten resource cost points. They're more commonly found nearby Kharaa Hives.

Gorges are very stocky creatures, and have very little attack power compared to other Kharaa. They have a carapace on their back for extra protection. Although having protection, they do not have a strong attack power, and instead offer support to other Kharaa from afar with ranged attacks or with healing. Its appearance resembles that of Earth's odd-toed ungulates.

Retrieved from "https://aliens.fandom.com/wiki/Gorge?oldid=170618"
Community content is available under CC-BY-SA unless otherwise noted.