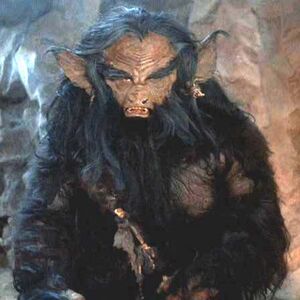 Star Wars
Gorax are a semi-sapient species of enormous bipeds which dwell in the forest moon of Endor. At least one individual resided in a fortress-like building in the Salma Desert.

Gorax are enormous bipeds which tower over both Humans and Endor's other residents, with the exception of the similarly humongous Phlogs and Bobogs; both of which might be related to them. They might also be related to the Hanadak species.

A Gorax's body is covered in long dark hair, with the exception of their faces, which resemble bat faces with huge ears and bushy eyebrows.

Nothing is known about this species, except that individuals apparently live alone and hunt for other species to feed on, including Ewoks. They sometimes keep live prey in cages, intending to consume them later. Boar-wolves are domesticated by Gorax and used as pets and hunting animals. Their technology is limited, but includes simple tools such as axes.