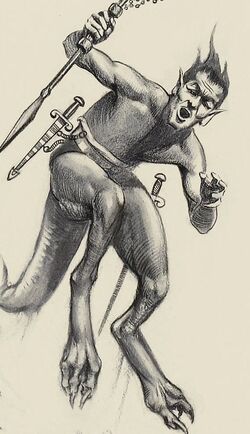 Edgar Rice Burroughs
The Goolians are one of the several races of oviparous humanoids from the planet Mars, a.k.a. Barsoom. They hail from the city of Gooli, in the Island of Ompt, and are easily distinguished by their powerful legs and long tails, as well as their marsupial nature.

Goolians resemble Humans in overall appearance, but possess kangaroo-like legs which allow them to move around by leaping. It's likely that their powerful legs, combined with the comparatively weak Martian gravity, make them prodigious jumpers. Like a kangaroo, they also possess a long muscular tail and the females have a pouch on the abdomen to carry their young, even though they're still born from eggs, as are all Barsoomians.

Despite being rather isolated from the other species (to the point that many aren't aware of their existence), Goolian culture has much in common with the other Barsoomian races. They wear no clothes other than some harnesses to carry their belongings, and use bladed weapons such as swords, daggers and spears for combat. They speak the same language as the other races and are likewise ruled by a Jed, who lives in a palace surrounded by multiple wives and counselors. They seem to place great value in marine shells, which they refer to as their "treasure".

Like the other races, Goolians appear quite belligerent and have a high esteem for combat. In their case, however, their strategy consists more of boasting and attempts at intimidating than actually fighting their opponents. If the actual battle becomes inevitable, most Goolians will prefer to flee, unless they outnumber their enemies by at least ten to one. When they actually accomplish victory (or anything else really), they will be sure to boast about it far more than necessary for a long time afterwards.

The typical Goolian attitude towards the other races, when they encounter them, seems to be one of superiority and xenophobia. They show particular disregard for the other races' females, as they consider them as only "half-women" since they have no pouches to nurture and protect their young.

Goolians also have no knowledge about the most advanced nations on their planet, and their contact with other species is restricted to small savage tribes. Because of this ignorance, they regard Gooli as the largest and most advanced nation of all of Barsoom.

Retrieved from "https://aliens.fandom.com/wiki/Goolian?oldid=183814"
Community content is available under CC-BY-SA unless otherwise noted.