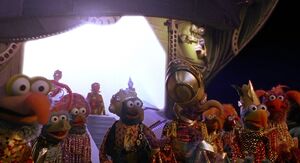 The Muppets
This is an unnamed, spacefaring alien species of mostly comedy-inclined beings.

Members of this species are relatively small humanoids, standing about the same size as Kermit the Frog. Their bodies are covered in fur which can vary in color from dark blue to purplish blue or magenta. Their faces are dominated by a long curved beak with no nostrils, and a pair of bulging eyes. Their hands have three fingers with no visible claws or nails.

It has been observed that members of this species are extremely resilient to physical pain and can withstand even physical deformations, including having their limbs stretched to several meters without any discomfort (in fact, they seem to find some amusement in this experience, which most other races would consider a form of torture).

Members of this species appear to be mostly benevolent and festive. They have a taste for circus-style performance, comedy, music and general extravaganza. A traditional ceremony of them involves being blown out of a cannon. Comedic skills are of great value to them, to such extent that they offered K. Edgar Singer a position as an official ambassador on their homeworld based purely on his perceived skills in comedy.

Little has been observed of this race's technology, other than a relatively small ship. However, it is known that they're capable of manipulating objects of any size; from the Great Pyramid of Giza to flocks of breakfast cereal; in order to transmit messages. They're also capable of channeling their voices from space through an inanimate object such as a sandwich.

Yet another method they may use to convey messages is via the Cosmic Fish, although it seems that these wise creatures are not under the command of Gonzo's species, as much as doing them a favor voluntarily.

At some point in the 20th century, a member of this species who became known as the Great Gonzo was separated from his brethren and ended up on Earth, where he grew up unaware of his origins. His alien relatives later managed to contact him, but unfortunately caught the attention of C.O.V.N.E.T. agent K. Edgar Singer and his associates as they looked for evidence of an incoming alien invasion.

Gonzo informed his relatives that he had received their messages by writing the words "I AM HERE" on his lawn with a lawnmower, and later appeared on TV to attempt communication, which attracted a large crowd of eccentrics and alien fanatics. As Gonzo was captured and held captive by C.O.V.N.E.T., the aliens contacted him again by channeling their voices though a sandwich. Gonzo informed them that his house wasn't a safe place to land since C.O.V.N.E.T. knew his address, and suggested that the aliens land on Cape Doom at midnight instead. He was later rescued by his friends and went to Cape Doom to meet them, followed by the whole crowd of fanatics.

While the aliens took more time than they had planned, they did finally arrive about one hour late and put on a huge festivity to celebrate Gonzo's rescue. The group's leader, Ubergonzo, informed Gonzo that they were impressed, both with his ability to survive on an alien world, and by his performance in the ceremonial cannon-blast. At the same time, Singer arrived and attempted to threaten the aliens, but found that his weapon had been unloaded by his assistant. His hysterical reaction caused the aliens to burst out laughing as they commended Singer on his comedic skills and offered him a position as the official ambassador from Earth on their homeworld, which Singer accepted. With that resolved, the aliens were ready to depart, taking Singer and Gonzo with them. However, Gonzo changed his mind at the last moment as he realized that the Earth was his home and he couldn't leave his friends. The aliens respected this decision and departed without him, along with Singer, who was eager for the opportunity to travel the universe.

Retrieved from "https://aliens.fandom.com/wiki/Gonzo%27s_Species?oldid=198166"
Community content is available under CC-BY-SA unless otherwise noted.