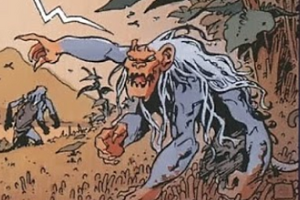 The Gondey are sapient species from the Lanfeust of Troy Universe.

They are a violent race that originally inhabited an abandoned orbital agricultural station. Influence by the Pumpkween they and the Wild Men raided the peaceful Blongos to bring sacrifices to feed it.

Retrieved from "https://aliens.fandom.com/wiki/Gondey?oldid=162694"
Community content is available under CC-BY-SA unless otherwise noted.