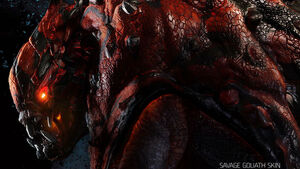 Evolve Universe
Goliath is a highly aggressive, saurian-primate like monster that has escaped upon Shear, and became one of the top predators. Goliath is a beast most notably for its strength.

Goliath is a upright saurian monster, similar in appearance towards a mix of dinosaur and primate features. It has broad shoulders, long powerful arms, and a thick neck, attached to a muscular, almost human-like torso. Its tail is small, but also broad and spiked. Its small jaws have a surprisingly huge amount of power, a bite force of 100,100 pounds per square inch. Its hide is covered in bony plates, and spines along the shoulders.

Despite Goliath's large size, it is very mobile, and able to climb almost any surface. While it doesn't have many paranormal abilities, like Wraith or Kraken, It does have a huge amount of strength and endurance when faced against its foes, able to tear a full grown human in half with little effort. It does possess an uncanny ability to breathe fire at will, which it uses to devastating effect. The fire in question is most likely created by a chemical reaction within Goliath's stomach or a specific organ that produces said chemicals. However this is pure speculation and specifics have not yet been stated.

Retrieved from "https://aliens.fandom.com/wiki/Goliath_(Evolve)?oldid=194916"
Community content is available under CC-BY-SA unless otherwise noted.