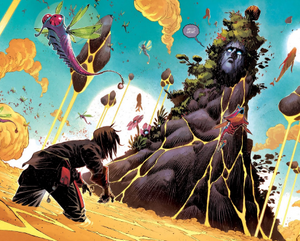 The Godhead was a powerful entity from Godworld, a dimension where imagination came to life.

When Grant McKay first came to Godworld, he encountered the Godhead who he asked to take his memories out of shame for the trials he put his family through. Eventually Grant's counterpart from the Neververse contacted Grant and told him to seek the Godhead. During the journey, he learned to let go of his emotional baggage and move on with his life. The Godhead awaited him at the mountain, congratulating him. The entity offered Grant a chance to once again have his memories returned or live in peace on Godworld. However, Grant turned it down as he decided he would become his own man. Accepting this, the Godhead gave Grant a hint that it was imagination that could power his broken Pillar to find his family.

The Godhead was a powerful entity that acted as a spiritual guide to those in pain. It was capable of taking away memories and reading minds.

Retrieved from "https://aliens.fandom.com/wiki/Godhead?oldid=138021"
Community content is available under CC-BY-SA unless otherwise noted.