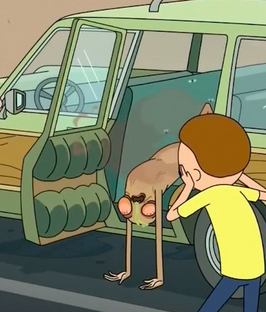 Nothing is known about him other than that he was a brown skinned alien from an unknown world. He appears in the post credits scene, when Jerry Smith was supposedly to bring Gobo back to his planet but ends up being dead in his car, much to his family's dismay.

Retrieved from "https://aliens.fandom.com/wiki/Gobo_(Rick_and_Morty)?oldid=182841"
Community content is available under CC-BY-SA unless otherwise noted.