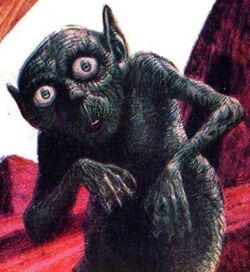 Clifford D. Simak
The Gnomes are a sapient, non-spacefaring race of small burrowing humanoids native to an unnamed planet located far towards the galactic rim.

Little is known about these creatures, other than that they have fur, which becomes grey as they age, and that they are colorblind.

Gnomes live in underground settlements, which resemble prairie dog cities when seen from above the surface. In the periphery of these cities, they grow crops, and spend much of their time on the surface, working out on their fields.

Their language is interesting in that they have no words to measure either time or space. Although they can distinguish past, present and future, they have no means to convey the duration of an event or period.

Their technology is primitive. Wheels and metals are both unknown to them. Their tunnels are illuminated by foxfire, resulting from decomposing wood. They have no concept of writing or painting, and will regard any such activity as magic, which is beyond their comprehension.

It was among these beings that the Human painter Reuben Clay opted to spend his last years in humble reclusiveness. The Gnomes loved Clay and respected him, even though their inability to perceive colors and their lack of a cultural concept of representation hindered their capacity to understand his work.

Retrieved from "https://aliens.fandom.com/wiki/Gnome_(The_Spaceman%27s_Van_Gogh)?oldid=186413"
Community content is available under CC-BY-SA unless otherwise noted.