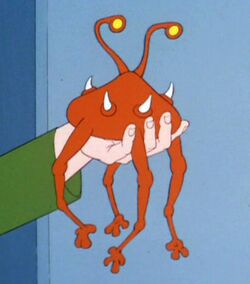 The Glommer is a predator genetically engineered by the Klingons to hunt, kill and eat Tribbles. The first Glommer of its kind was stolen by Cyrano Jones in 2269 claiming it under the space salvage laws.

That same year, Captain James T. Kirk rescued Cyrano Jones from the Klingons. Cyrano brought the Glommer with him onto the USS Enterprise. After the Tribbles grew to be enormous, the Glommer did not seem so eager to eat them.

The anatomy of the Glommer is fairly simple. On the bottom of the Glommer there is a mouth with many pulsating teeth which goes straight into a bottomless ring-shaped stomach where the leftovers are later ejected as a waste oil through the skin. The brain is slightly larger than a Tribble's, allowing them to outsmart (but not by much) their prey. It is assumed the heart is bigger than a Tribble's, accounting for the Glommer's four legs. It might walk in a crab like style, but presumably in any direction, given that its body has a bi-radial symmetry.

Retrieved from "https://aliens.fandom.com/wiki/Glommer?oldid=163666"
Community content is available under CC-BY-SA unless otherwise noted.