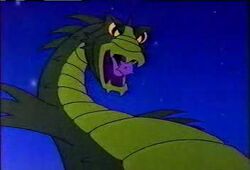 They infest the local glok pits, attacking intruders that encroach into their territory. Normally, they sleep buried in the glok pit soil, but will hostilely erupt out of the dirt when disturbed. Despite their ferocious appearances, they appear to have sensitive skin - likely a cause and effect of their apparent sensitivity to ground vibrations - which makes them especially susceptible to skin-affecting weapons such as itching powders.

The Stranger, a Wizard of the Night Spirit, used the power of the Sunstar to mentally control a Glok Monster during the Stranger War, which took place between his species and the Ewoks. While it was capable of capturing Latara, an Ewok child, it was eventually accosted by another Ewok, Teebo, using an itching powder potion.