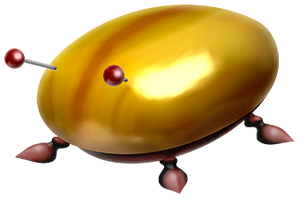 The Glint Beetle, in anatomy, mirrors the previous evolutionary strands of the Iridescent Flint Beetle, but its shell is yellow and iridescent in a gold covering.

Glint Beetle's main diet is subterranean minerals. Some of these minerals however aren't actually able to be digested, which includes gold, and are instead absorbed into its shell to give it its hard covering and coloration.

Retrieved from "https://aliens.fandom.com/wiki/Glint_Beetle?oldid=150703"
Community content is available under CC-BY-SA unless otherwise noted.