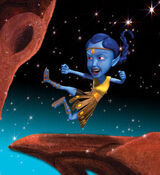 The Glimmorians are a species of blue-skinned warriors native to Zeenu.

The Glimmorians are blue-skinned humanoids with violet eyes, pointed ears, and dark blue hair which can be used as a third arm. It is apparent that the male Glimmorians are capable of growing large prominent moustaches which are used for the "Glimmorian Moustache Dance."

The species has a symbiotic relationship with a creature called a Roove which lives in their throat, it allows the species to yodel (an important aspect of their culture), and overall holds them together. If they lose their Roove first they lose the ability, then their sense of direction.

Retrieved from "https://aliens.fandom.com/wiki/Glimmorian?oldid=187050"
Community content is available under CC-BY-SA unless otherwise noted.