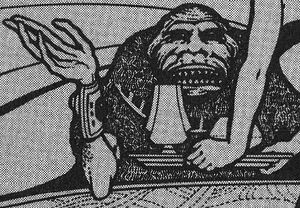 The Gligstith(click)optok (or simply Glig) are a sapient alien species known for their extremely advanced medical and biological science. They hail from the world known as Gligstith(click)tcharf.

They are robust creatures with grey skin, and are very short and compact compared to the Chirpsithra, but still not short at all by Human standards. Like Humans, they breathe oxygen and have a DNA-based genetic structure.

The most humanlike aspect of the Glig is their hands, which look similar to Human hands, but have short palms and an extra joint in the fingers. Like a shark, they have wide mouths equipped with several rows of teeth, reflecting their carnivorous nature. They are also known to consume alcohol (typically beef consommé and vodka).

It's likely that the race is genderless, since individual Glig seem to be referred to by the neutral pronoun "it" rather than "she" or "he".

The Glig homeworld orbits a star hotter than Sol, therefore they regard the Earth climate as cold. When on Earth, they are invariably seen wearing fancy fur coats patterned in three shades of green.

The Glig are carnivores, and see no ethical problem in acquiring other species' DNA in order to clone them for meat.

Retrieved from "https://aliens.fandom.com/wiki/Gligstith(click)optok?oldid=186486"
Community content is available under CC-BY-SA unless otherwise noted.