The glickbol is the least complex and most vulnerable creature in the Savannah. 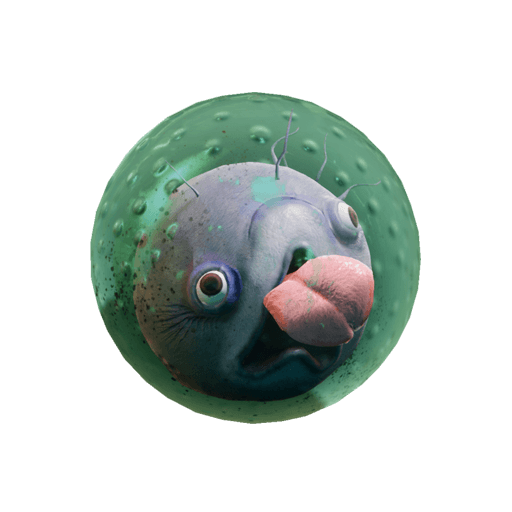 The Glickbol is the earliest developmental stage of Glossosphairium polymorphum, which eventually metamorphoses into the creature known as a Tonglegrop. Encased in a thick, translucent membrane filled with gelatinous material, the larva absorbs nutrients via osmosis and is only capable of controlling its movement by awkwardly exerting pressure on the inside of the membrane with its tongue. As such, it makes easy prey for most predators on the Savanna, and the survival of the species depends on little more than numbers and luck.

When the membrane of a glickbol is pierced, it is unable to survive and its head comes out. Eating this head will grant the legless mutation, removing your legs and stopping you from jumping for 20 seconds. You can only roll while this is active.

Glickbol are clumsy and unagile but can be fast. They are the lowest on the food chain, but travel in large groups and try to defend their friends from being picked up by mischievous Trebhum by rolling and slamming themselves into the Trebhum. Other than that, their survival depends on little more than numbers and luck.