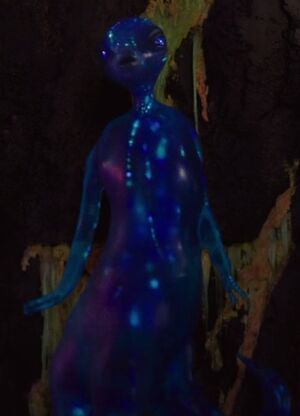 Tentacles (in their natural form)

Glamopods are a sapient species of shapeshifters.

In their natural state, Glamopods resemble sea creatures with a semi-humanoid head and torso, luminescent blue skin and tentacles for locomotion. They have proportionally short tentacular arms, large eyes, and a toothless mouth reminiscent of a fish's.

Glamopods can shift form almost instantly, and perfectly mimic the appearance and voice of other beings. They can alter their size to some extent, being capable of impersonating a wide range of creatures from Human children to Boulan-Bathors. They can also harmlessly engulf another being inside their bodies and shape-shift while keeping the person hidden inside them.

Besides shape-shifting, Glamopods also possess psychic abilities to some extent. By making physical contact with another being, they can access their memories, which enables the Glamopod to assume the appearance and voice of someone they've never seen personally, but which is familiar to the person they're in contact with.

Despite their malleable bodies, they don't seem to be immune to bladed weapons. When they die, their bodies solidify and crumble to dust.

Retrieved from "https://aliens.fandom.com/wiki/Glamopod?oldid=189499"
Community content is available under CC-BY-SA unless otherwise noted.