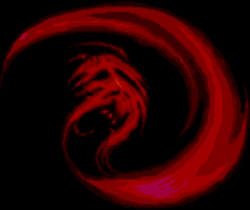 Mother Universe
Giygas or Giegue is of an unnamed race in the video games Mother and Earthbound created by Shigesto Itoi and published by Nintendo in 1989. He was raised as a good soul by the abducted couple named Maria and George in the year 1900. George, against the people's wishes, learned the powerful PSI (PK) powers. The race had told Giygas it was unacceptable and he must destroy the Earth with his army of Cyborgs called Starmen. He was defeated by a young boy named Ninten 80 years later by singing a lullaby called the eight melodies that Maria used to sing to Giygas. A few years later, he went insane with power after he found a lonely fat boy named Porky Minch. He was so unstable he had to be kept in a capsule called 'The Devil Machine'. Later, a boy named Ness and his friends killed Giygas with prayers and another set of melodies. He lost all of his mind in that form and had no idea what he was doing. When defeated he is never heard from again and Porky escapes via time travel and wrecks havoc in the future. Some fans say Giygas isn't as evil more than he was manipulated. His powers included PSI Freeze, PSI Rockin and "ungraspable attacks" as well as combined PSI powers. Of his Starman army there are many types such as Starman, Starman Junior, Starman Super, Blue Starman, Ghost of Starman, Starman Deluxe, Last Starman, and Final Starman. He can create poltreggists and can take control of animals.

Retrieved from "https://aliens.fandom.com/wiki/Giygas?oldid=188929"
Community content is available under CC-BY-SA unless otherwise noted.