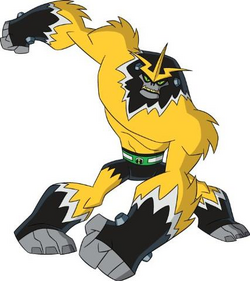 Ben 10
Gimlinopithecus are yellow sasquatch-like aliens from the planet Pattersonea.[1]

Gimlinopithecus are bulky and ape-like in appearance. They have yellow and black fur, along with grey fingers and toes. They also have two bolts on the side of their wrists and yellow crest-like horns.

Males tend to be yellow in appearance with black areas on their limbs and white lightning bolt markings bordering these areas.

Females look similar to males, but with paler yellow skin and more white areas on their bodies. They also have a more feminine figure, with a skinnier waist and voluptuous breasts.

Gimlinopithecus can release electrical charges from their hands, mouth, and body that come in different colors, such as yellow and blue. These charges are powerful enough to harm Tetramands, Buglizards, and entities as large as the Alpha Nanite.

By covering objects with their electricity, Gimlinopithecus can telekinetically move them.

Gimlinopithecus possess enhanced durability, being able to withstand being flicked off the shoulder of a To'kustar. Their thick fur renders them immune to freezing climates, such as those found on Pattersonea.[1]

Gimlinopithecus possess enhanced speed and dexterity, allowing them to run on all fours.

Gimlinopithecus can generate electric force fields to fire multiple beams of electricity at once and temporarily shield themselves from cosmic radiation.[1]

Gimlinopithecus can be trapped by an Evolved Arachnichimp's webbing, which can also insulates and cancels out their electrical attacks.

Despite their immunity to freezing climates and cosmic radiation, these can still be lethal to a Gimlinopithecus after a certain period of time.[1]

Opponents such as a hybrid Terroranchula can absorb electricity through Gimlinopithecus.

Gimlinopithecus tend to be polite unless they are playing hockey. 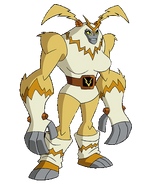