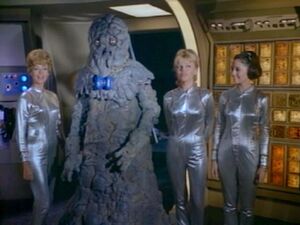 Slightly taller than the average Human

Gilt Proto's species is an unnamed race of strange, conical beings notable for being all identical, both physically and mentally, as they have no concept of individual differences.

They're also known for their technology which allows them to turn themselves into organic duplicates of other beings.

These aliens are legless, conical-shaped, semi-amorphous beings with brownish-grey skin and a pair of humanoid arms. Their eyes are spherical and metallic-looking. They have demonstrated the ability to teleport (although that might be due to technology) and to produce sound waves which can paralyze other creatures.

Residing on an unnamed world, the aliens considered their own society to have become stagnated and blamed the situation on their mental and biological uniformity.

When they made contact with the Humans of the Jupiter II crew and noticed their individual differences, the aliens became convinced that they could reinvigorate their civilization by creating duplicates of the Humans, and using these to hijack their ship and take over the Earth.

Although they were hard to distinguish from the originals, the alien duplicates were not perfect. Some possessed membranes between their fingers, which had the potential to quickly give away their nature. Their unfamiliarity with individual differences in general and the concepts of hierarchy and rank in particular also proved to be prone to disrupt them, putting them into conflict with each other.

At the end, seeing that their plan had failed and that Will Robinson, Dr. Smith and the Robot had managed to reclaim the Jupiter II, the aliens concluded that, although they may have much to learn from Humans, the changes to reverse their social decadence must come from within them.

Retrieved from "https://aliens.fandom.com/wiki/Gilt_Proto%27s_species?oldid=182036"
Community content is available under CC-BY-SA unless otherwise noted.