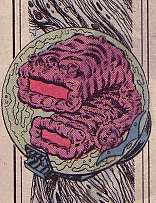 The Gil'Dishpan are the oldest and most powerful, imperialistic, space-faring, aquatic extraterrestrial race in the universe. They appear to be purple giant tube worms, and are powerful telepaths. The Gil'Dishpan have taken an interest in younger aquatic races such as the Hykraians, Qarians and the Atlanteans. They were responsible for uplifting the Hykraians and giving them the gift of interstellar travel. Their homeworld is a frozen planet with methane oceans similar to the Lakes of Titan.

When the Dominators saw the superhumans of Earth as a threat, they joined the other races like the conquering Thanagarians, Okaaranos, Psions, Durlanianos, Khundios, Daxamitas and Gil'Dishpans. The Gil'Disphans took care of supplies for the alliance.

They chose Antarctica as the first place on Earth to be their base. Aquaman, along with the Atlantean army, the Doom Patrol and Sea Devils, fought the Gil'dishpans and their mutant creations in the Antarctic Circle, but the battle was a loss, Celsius the leader of the Doom Patrol was sacrificed to damage the flagship of the aliens.

After the boy known as Cobi became Starro the Conqueror, he gained control over all Star Conqueror species to create a powerful army, but this army of Starro was different because they have free will as long as they obeyed his orders. The army was so powerful and won nine galaxies, heading towards the Milky Way next. Upon his forces reaching the Milky Way, Starro took control of L.E.G.I.O.N.'s robotic forces and used their widespread galactic influence to further his goals towards dominating the universe.

After these events began, stars were sent to various worlds, the R.E.B.E.L.S. managed to save some breeds of the survivors and took them to the world of Gil'dishpans. On their planet, Vril Dox II, they created a protective dome to prevent the invasion, but that proves useless because Starro dominated all Gildishpans. To escape, a Dominator steals the nuclear-powered ship of the R.E.B.E.L.S., to start the engine propelling the ship with the methane oceans of the Gil'Dishpan.

A chain reaction destroyed the entire planet, there were no survivors.

Retrieved from "https://aliens.fandom.com/wiki/Gil%27Dishpan?oldid=180030"
Community content is available under CC-BY-SA unless otherwise noted.