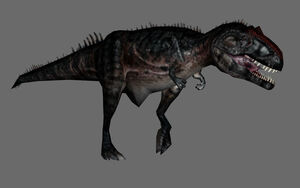 Giganotosaurus would have fed on smaller dinosaurs like stegosaurus. They can take out large predators like Suchomimus or Nanotyrannus with little struggle.

Giganotosaurus' appearance is very black in appearance, and has a reddish hump on its head with spines running on it's back.

Giganotosaurus appears first in Carnivores Cityscape, and it is its only appearance.

Retrieved from "https://aliens.fandom.com/wiki/Giganotosaurus_(FMM-UV_32)?oldid=189510"
Community content is available under CC-BY-SA unless otherwise noted.