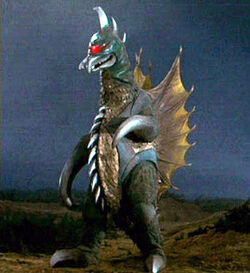 Godzilla
Gigan is a gigantic alien cyborg employed by the M Space Hunter Nebula Aliens and later the Xiliens to overtake Earth.

Gigan was sent to Earth with the three-headed monster King Ghidorah to destroy Tokyo. Godzilla and Anguirus put up a fight, and after a long and grueling battle were forced to retreat, with Gigan fleeing the battle and leaving King Ghidorah to take a beating before the golden dragon also fled. About a year later, Gigan was sent back to Earth to help the Seatopians destroy humanity. He fought alongside Megalon against Jet Jaguar and Godzilla. When the odds turned against them, Gigan abandoned Megalon, leaving him for dead. Later that year, he was sent back to Earth again to help the Garogas fight Godzilla and a giant superhero known as Zone Fighter. Although his anti-gravity and buzzsaw were not working, the Garoga gave him explosive tips in his scythes as an upgrade. It wasn't enough, however, as Godzilla pounded the cyborg into submission before Zone Fighter engaged Gigan - the alien cyborg finally meeting his demise by Zone Fighter's Meteor Missile Might attack.

In the Millennium era (unrelated to any of Gigan's previous appearances), Gigan appeared in Godzilla Final Wars and was shown to have invaded Earth, but was defeated and sealed away by Mothra - his mummified remains been later found in 2004. Near enough the same time. A race known as the Xiliens arrived and seemed to save humanity from a mass monster attack. However, it was later revealed to be a hoax and the Xilien's plans to take over Earth were revealed. The monsters - aided by Xilien fighters - resumed their attack on Earth's cities, with Gigan been revived to attack Tokyo. He was later sent to the South Pole to destroy a flying ship called the Gotengo. Instead, he wound up fighting Godzilla (who the Gotengo had freed from his icy prison) and was killed after his head was blown off by Godzilla's atomic breath.

Gigan later returned, resurrected again and upgraded with new abilities, such as dual-chainsaws in place of his scythes and the ability to fire razor discs from his chest. Interrupting a battle between a Godzilla-Mothra team and Monster X in the ruins of Tokyo, he joined Monster X. He managed to cut off one of Mothra's wings, incapacitating her; he and Monster X then attacked Godzilla. Then, Mothra came back and attempted to kill Gigan. He fired two discs at her, but their targeting was disrupted by her scales. He then fired his laser at her, setting her on fire. Just as he thought he had finally triumphed over his ancient nemesis, the two discs that had missed Mothra came back and decapitated him. He remained alive, but then Mothra, covered in flames, flew down and hit Gigan, blowing him up and finally putting an end to the cyborg's reign of terror...although whether or not it was for good remains to be seen.

Gigan's eye can generate a powerful laser that can easily cut through buildings. He also has scythe-like arms so sharp they can even cut Godzilla, although the scythes can be interchanged with other weaponry - such as the dual-chainsaws he used in Godzilla Final Wars. He has a powerful and durable buzz saw going down his chest and stomach; it was sharp enough to rip open both Godzilla and Anguirus and cause them to spurt blood.

Gigan can fly as well - using anti-gravitational abilities to fly as his wings are far too stubby to carry his massive body. In the Millenium Era, Gigan flies using a jetpack (which was to give him a more 'robotic' appearance).