The Gibborim are a group of interdimensional deities in Marvel's "The Runaways" comic book series. 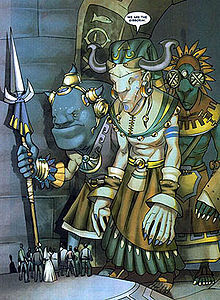 based off of Aztec, Mayan, and Native American design

The Gibborim are a group of 100ft tall, six-fingered entities with a god complex. Their specific design various from each of them, such as their skin color (blue, white, and black) and clothing. Their clothing designs do resemble the clothing of various ancient civilizations from Earth's history, such as the Mayans, Aztecs, and even the Native Americans. Which ads to their god-like status.

The Gibborim were among the Elder Gods who have survived the Demogorge. Over time, they began to be drained of their power and went to dwell in a dimension known as "The Realm of Slumber". Their primary goal is to wipe out all human life on planet Earth. Because of their unfortunate power drain, they called upon six couples of dark magicians, time travellers, aliens, scientists, criminals, and mutants in 1985. These couples became a secret organization known as The Pride and they were told that if they destroyed all mankind (which would lead to Earth becoming a utopian paradise populated by the Gibborim like it was millions of years ago), the six of the twelve members of The Pride that served the Gibborim best would join them in the new world and gain immortality while the other six dies with the rest of humanity. An act similar to many religious beliefs of Armageddon like Ragnarok and Judgement Day. For twelve years, the Gibborim gave the couple's wealth and power and became some of the most powerful people in Los Angeles. The worship of ancient deities and their hidden secrecy has given The Pride a cult-like reputation in the Marvel Universe, similar to other pop-culture cults such as The Cult of Cthulhu. The Pride also forms what is known as the Church of Gibborim which has gained a similar reputation to that of the Church of Scientology. The Pride has managed to hide their cultist acts from the public by claiming to be a charity organization who is in partnership with the Church of Gibborim (who gives the poor, homeless orphans a home and are taught the church's doctrine)

Each year, The Pride performs a ritual called "The Rite of Blood", where they sacrifice an innocent young girl, whose spirit would be consumed by the Gibborim in "The Rite of Thunder". After the pregnancy of Janet Stein, who was one of the members, The Pride decided to end fighting for their spot in the new world and give it to their future children. However, the Deans (aliens) and the Hayes (mutants) decided to secretly go against their promise with The Pride and later kill off the other members to have the six spots be given to them and their children. Seventeen years later, the Rite of Thunder was interrupted by the teenage children of The Pride members. Because of their discovery, the children were on the run from their parents and began to discover their various abilities passed on from their parents and became a group known as The Runaways who sought to stop their parents and the Gibborim for their sacrificial acts and to prevent the oncoming apocalypse.

Members of The Pride[edit | edit source]

Members of The Runaways[edit | edit source]

The Gibborim are said to have the ability to resurrect mortal beings (despite other death gods and cosmic beings in the Marvel Universe being unable to do so) but require an innocent soul in order to bring back someone. While it is unknown of the full extent of this ability, it is said that their powers of resurrection can bring the entire planet Earth back into being if it were ever destroyed and can wipe out the entire human race if possessing enough soul energy. They can also generate fires to set humans ablaze, create enchanted tomes and rings, dispel dark spells from Minorus conjuring bats, can teleport people from different locations and time periods to a single area at a single moment in time (what they used to gather potential members of The Pride), and has possess an immunity to harm, whether energy-based or physical.

Retrieved from "https://aliens.fandom.com/wiki/Gibborim?oldid=163020"
Community content is available under CC-BY-SA unless otherwise noted.