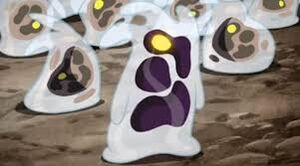 The Gibble are an alien race.

From human standards, they resemble amoeba the size of a small child. The Gibble physiology is sustained by an unexplained energy source.

Completely sapient, the Gibbles were a peaceful race until they were routinely attacked and harvested by the space pirate, Kanjar-Ro as he discovered he could use the Gibbles to fuel his armada.

However a Blue Beetle came and defended the Gibbles fighting off Kanjari-Ro. When he was killed, the Gibbles were defenseless again. After a stroke of luck occurred when the Blue Beetle Scarab, now in Jaime Reyes' possession, detected Kanjar-Ro's fleet and teleported him and Batman to the Gibble homeworld the Gibbles rejoiced to have their protector again. The two heroes were able to inspire the aliens and convince them to learn to fight for themselves and rescue their comrades. In recognition, the Gibbles erected a statue of Batman, next to their first of Blue Beetle.

The Gibble were originally a pacifist race relying on their defender the Blue Beetle to defend them. Over time, the Gibbles became dependent on Blue Beetle for protection and idolized him as a demigod. After the Batman and newest incarnation of the Blue Beetle taught them to how to fight the Gibble embraced their new roles.

Retrieved from "https://aliens.fandom.com/wiki/Gibble?oldid=168765"
Community content is available under CC-BY-SA unless otherwise noted.