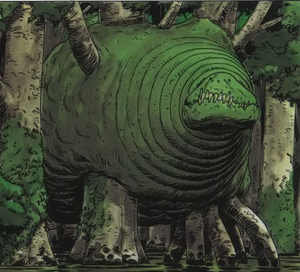 The Giant Eleuters are rare carnivorous mobile plant creatures native to the Giant Swamps of Aldebaran-4. Normally they are incapable of movement, measure just a few inches but these giant species are a rare exception.

As they grow, they partially engulf surrounding tree trunks and use them as means of support for their massive weight. An ambush predator; the Eleuter waits for its prey to approach before devouring it in a sudden movement.

Retrieved from "https://aliens.fandom.com/wiki/Giant_Eleuter?oldid=182446"
Community content is available under CC-BY-SA unless otherwise noted.