The Giant Cyclops is a roughly 18 meters tall one-eyed humanoid native to the canyons of planet Preplanis.

Its behavior is distinctly hostile, even towards much smaller beings that couldn't possibly represent a threat to it, indicating predatory habits. It also shows signs of some level of advanced intellect, such as throwing boulders at its targets.

It's likely that this species became extinct after the destruction of Preplanis. 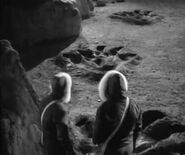 The Cyclops' footprints.
Add a photo to this gallery

Retrieved from "https://aliens.fandom.com/wiki/Giant_Cyclops?oldid=155634"
Community content is available under CC-BY-SA unless otherwise noted.