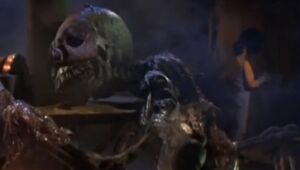 Planet of the Vampires

This is an unidentified species of spacefaring alien humanoids, estimated as being three times the size of a Human, and with calcium-based internal skeletons.

The skeletons of at least three members of this race were found alongside their abandoned spaceship on the planet Aura. The parasitic Aurans later admitted that they lured the alien spaceship to their world and tried to take over the bodies of the crew, but apparently, their plan was unsuccessful.

Retrieved from "https://aliens.fandom.com/wiki/Giant_Alien_(Planet_of_the_Vampires)?oldid=159224"
Community content is available under CC-BY-SA unless otherwise noted.