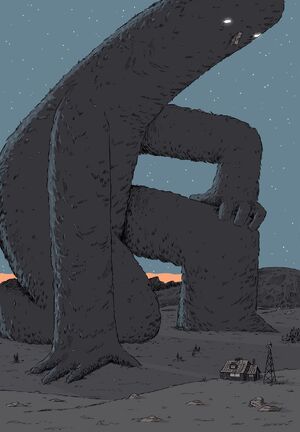 Luke Pearson
The Giants were a very ancient race of fantastic beings that haven't been seen around on the planet Earth for quite sometime in eons.

As described by the Wood Man from written his book; Giants this big haven't walked the Earth for a roughly good long time. They are considered as a peaceful gargantuans that were believed to have once guarded the entire planet, where any young Giant could be summoned as guardian, a sworn duty that would last for millennia where it's said that he or she would sit and gaze up on top of a highest peak watching out for unknown dangers that might've come from above and according to legend that the last to have been chosen as guardian was Jorgen.

Dating back to about four-thousand years prior, Giants arrived in long before others such as Humans as they were the first. However over time when things started getting small, people began appearing and built houses for themselves but only when the Giants kept accidentally stepping on their homes.

Soon after, there fights and arguments against the Giants as they realised that it just wasn’t their world anymore so they all decided that it was time to leave and nobody knows where the Giants all went for sure exactly, but there are some who say that that they jumped enough escape Earth as they were carried away into space.