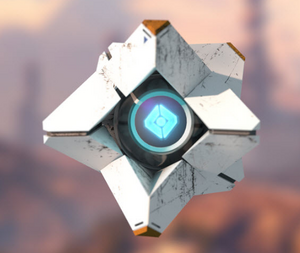 Destiny
The Ghosts are small floating cube-like constructs created from the Traveler.

The Ghosts are small drone-like machines resembling a cube-like frame covering a sphere like eye. Ghost are programmed with various personalities making them intelligent and possess free will. They are able to resurrect those capable of wielding Light, reforging them into Guardians to fight the Darkness.

During the battle between the god-like machine known as the Traveler and its antithesis the Darkness, the Traveler succumbing to its wounds fell into a coma. Before lapsing into stasis, its used the last bit of its power to create the Ghosts. The Ghosts were given a single mission, to find those who could wield its Light and reforge those worthy to become a race of immortal warriors that would protect its children: humanity.

Retrieved from "https://aliens.fandom.com/wiki/Ghost_(Destiny)?oldid=196963"
Community content is available under CC-BY-SA unless otherwise noted.