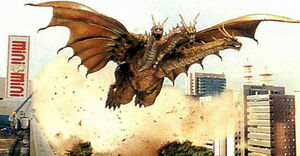 Life force of other creatures

The Ghidorahs are characterized by their three heads, each of which are topped by ornamental horns. King Ghidorah is bipedal and lack arms, only possessing two large wings. Desghidorah and Keizer Ghidorah, by comparison, are quadrupedal and possess wings in addition to fore and hind limbs.

It is established in the Rebirth of Mothra trilogy that Ghidorahs are a parasitic race that travels from planet to planet and kills all of the life it comes into contact with, feeding on their life force. For this reason, the Ghidorahs are responsible for a great deal of death in the universe. Even when very young, King Ghidorah single-handedly caused the extinction of the dinosaurs. Ghidorahs can also live for millions upon millions of years, even when sealed deep underground.

Retrieved from "https://aliens.fandom.com/wiki/Ghidorah?oldid=180277"
Community content is available under CC-BY-SA unless otherwise noted.