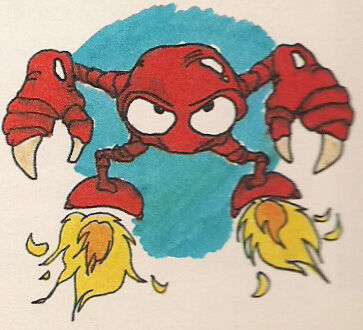 Gerutas are flying, extremophile predators that are native to the volcanic caves in the Norfair region on Zebes. They are avid hunters, akin to the Reo, possessing a heat-resistant carapace and large claws. The Geruta has a unique means of flight, as it uses two jets that allow it to dive onto its prey like a rocket. It is unknown how the Geruta uses such jets, but it can be guessed that it is because it evolved in a volcanic environment.

While the species went extinct in the wild upon the destruction of their homeplanet of Zebes, a number were known to have been taken off-world at some point to the Biologic Space Laboratories research station above SR388, these samples were eventually infected by X Parasites and transformed into Gerubosses and most likely Gerudas. Ultimately the BSL station was destroyed as well, leaving the Geruta at extinct status unless other specimens reveal themselves.

Retrieved from "https://aliens.fandom.com/wiki/Geruta?oldid=181654"
Community content is available under CC-BY-SA unless otherwise noted.