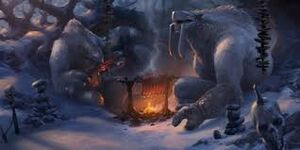 The Geldirus were originally a pack of wolves that were driven into an inhospitably high tundra after losing a series of fights with the Drakken. They were infected by Dust, transforming them into semi-intelligent lumbering giants allowing them to be indifferent to the coldest environments and seasons.

Retrieved from "https://aliens.fandom.com/wiki/Geldirus?oldid=182200"
Community content is available under CC-BY-SA unless otherwise noted.