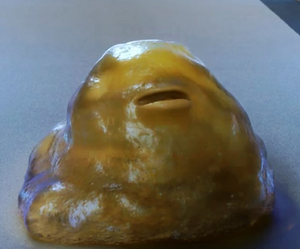 The Gelatins are a species of gelatinous blobs and members of the Planetary Union in The Orville TV Series.

Gelatins are a mucus gelatinous substance. They are able to communicate, by forming mouths to simulate speech. Jellies reproduce via mitosis and are able to shape their bodies into whatever physical form. While they are asexual and reproduce through mitosis, they still identify themselves as masculine or feminine.

Retrieved from "https://aliens.fandom.com/wiki/Gelatin?oldid=151093"
Community content is available under CC-BY-SA unless otherwise noted.