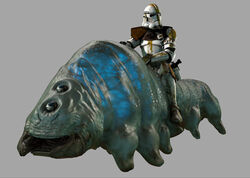 The planet's local star bathes the land in golden yet intensely ultraviolet sunlight than most other habitable worlds. Like all other natural flora and fauna native to Felucia, the Gelagrubs had to adapt to this, and the biology there took one of two paths to protect themselves from otherwise fatal radiation poisoning—the Gelagrubs however were unique in that due to their multi-stage lifestyle they used both styles, one in the instar stages and the other in their imago state.

As an insectoid organism, the Gelagrubs utilized a multi-stage life cycle. During their immature instar stage(s), they were gelatinous in form and had a shimmering, semi-translucent skin capable of metabolizing UV-filtering chemicals from the native vegetation they consumed—specifically of the lichen-equivalent variety—and distributed it to hypodermic, subdermal ducts, affording their internal organs a natural sunscreen. However, this also meant that they had to constantly eat. Their mouths were wide, above which sat two vertically-aligned eyes. Their legs were in the form of two rows of stubby legs, endowed with adhesive characteristics in oder to enable them to climb steep inclines with relative ease despite their large size.

Once the creature pupates and emerges into its mature imago stage, they would emerge as a hard-shelled ground-based creature, similar in overall physiology to giant beetles. In this final stage they would forgo the larval's translucent skin in favor of a mirrored carapace. This carapace proved to be brilliantly reflective, and bounced back the worst of the star's rays.

They are a mostly docile species, which makes them easily domesticated during the larval stage. These domesticated members were used as mounts by both the Gossam as well as the Clone Troopers that later invaded the planet during the Battle of Felucia of the Clone Wars. There is no direct evidence that the adults were used in the same fashion; this may be because their mirrored shells would likely be blinding to look at, and would presumably cause permanent damage after a while.