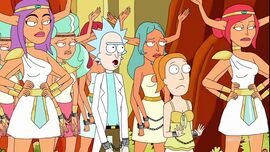 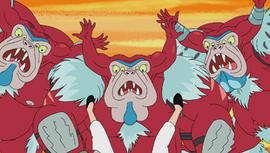 Gazorpians are a race of tall humanoids from their home planet of Gazorpazorp.

The Gazorpians are humanoid aliens who appear to have six arms, two on their heads and four on their shoulders. However, the genders were completely different, as they were divided after the result of conflicts in the past. Females have slender orange skinned bodies while males have dark red skin with blue fur and four eyes. Females have became advanced and sophisticated, while the males became savage and primitive creatures. The females can be famously known making their sex robots in order to continue the growth of their race.

Retrieved from "https://aliens.fandom.com/wiki/Gazorpian?oldid=184364"
Community content is available under CC-BY-SA unless otherwise noted.