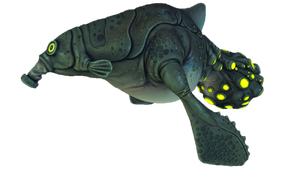 The Gasopod is a large aquatic creature indigenous to Planet 4546B's shallow waters. It is an elephantine creature with a swollen, nearly spherical body that ends in a rotund tail. Its weight is concentrated mostly in its tail, and its skin consists of large, leathery scales while the skin on its large, round belly is smooth in texture, and the area around the tail is covered in large, green-yellow boils. The Gasopod has two large eyes with broad, unblinking eyelids and a wrinkled trunk ending in a cylindrical mouth with five holes comprising the mouth, giving it a distinctive gas mask-like face. Two small ear-like fins extend from its neck and it has large, paddle-like flippers that protrude towards its sides. It also features a dorsal fin towards its rear end.

The Gasopod is the planet's version of Earth's Manatees; a slow swimmer feeding on various sea grasses and other aquatic plants. It is a diurnal creature, mostly active during the day and resting by night. It doesn't stray too far off shore, and stays within shallow seas. While not normally aggressive, when threatened, it is able to release a acidic-like sustenance from its large tail, as a main (and only) form of defense. Its chemical defense is made thanks to a bioluminescent algae that grows on the Gasopod's tail.

Retrieved from "https://aliens.fandom.com/wiki/Gasopod?oldid=172654"
Community content is available under CC-BY-SA unless otherwise noted.