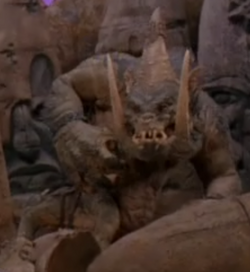 Coneheads
In the movie Coneheads, The Garthok is a six-limbed giant animal native to Remulak. These taloned, tusked, and single horned beasts emerge every Zerl, or Remulakian Year, specifically when the three moons of Remulak align. During this time of Zerl the Remulakians or Coneheaded aliens bring forth criminals to fight the garthok, in order to get a reprieve from their crimes. Considering the size power and Ferocity of the Garthok, and how most Remulakians who were to face the Garthok in the film "Coneheads" ended up mutilated, it can be assumed that it is rare for a Remulakian to regain his freedom.

Much is unknown about Garthoks. Though the creature has talons and sharp teeth, it did spit out pieces of the Remulakians that it killed, possibly indicating that it is a vegetarian (or just didn't like Conehead flesh). The former is in keeping with some giant earth vegeratians, such as Rhinos and Hippos, which are known for their ferocity and short tempers. The creature had the same blue blood as a Remulakian, and had a high pitched roar that was nowhere near as loud or as impressive as would be expected from such a vast creature. It is strong enough to tear apart a Remulakian, which, as seen by Beldar, are strong enough to punch through walls, stop a car from driving off using just one hand, and tearing into the metallic roof of a car one handed. Considering this, and the fact that they are native to Remulak, Garthoks may be far stronger than megafauna animals on earth (Hippos, Elephants, Rhinos, etc) just as Remulakians are far stronger than humans.

In the Film, Beldar Conehead slew the creature by striking a golfball with his sickle weapon, which shot into the creature's mouth and then throat, choking it to death. Later, in a brief scene, one can see the severed head of the Garthok, and Beldar covered in blue Garthok blood.