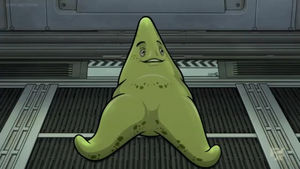 Archer
The Garj are an alien species from the planet Garj.

The Garj are a green triangular species. They are amorphous, able to turn into a liquid and move through even the smallest of cracks. Possessing eyes and a mouth, they also have two limbs that they use for locomotion and to grasp tools. In addition, they appear to be divided into two sexes.

Garj seem to possess a royal family known as the House of Garj.

Retrieved from "https://aliens.fandom.com/wiki/Garj?oldid=160946"
Community content is available under CC-BY-SA unless otherwise noted.