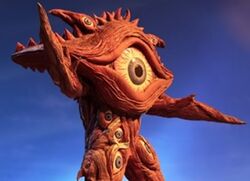 Ultraman
Gan Q are bizarre, extradimensional lifeforms. It appears as bipedal giant eye, with several smaller eyes all over its body. Being creature from another dimension, Gan Q found everything on Human dimension to be funny. Never ending laughter can be heard from it, thus it can be consider as "insane" by Human standard. Gan Q can burrow itself underground, though it might expose the big eye to keep watching the world. The big eye can launch energy blast as well as absorption beam. The absorption beam is use transporting things inside its body which appear to be a pocket dimension with uncountable eyes watching from everywhere. Absorbed matter will be convert to energy and feed by these eyes, though a living will got tortured by its laughter, slowly drive him mad. Gan Q is capable to absorb object as large as itself and may absorb smaller object by direct contact. It also has powerful telekinesis which can drive people mad simply by watching it, regardless of range.

Gan Q was first encountered during XIG's (eXpanded Interceptive Guardians) aerial training, the fighters attack the laughing eye but all missiles were absorbed before Gan Q went underground. When Gan Q reappear, it wrecks havoc with the energy blast before attacked by XIG fighters and Ultraman Gaia. Though Gan Q manage to absorb Gaia, he withstand its madness-driven laugh and break through the pocket dimension, destroying Gan Q from inside.

Gan Q later revived by ghost of ancient sorceror named Mato. The revived Gan Q appears to be zombified, though it still retain the childish laugh and energy blast. Although it no longer use absorb beam, Gan Q may creat projection of its small eyes, each capable of shooting weaker energy blast.