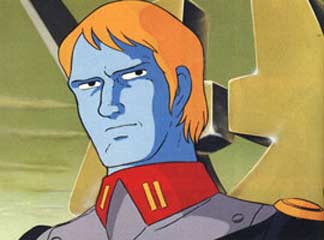 Planets with high radiation levels in the atmosphere.

The Gamilons are a race of blue-skinned aliens that exist in the Star Blazers Universe. They live on their home world of Gamilon (planet), but they were originally colonists from the planet Galman. When their world starts to fail them, they search the nearby Milky Way galaxy, and find Earth. Using their unusual but effective method of terraforming, they launch hundreds of planet-bombs at earth, which are full of radiation. They are not able to breathe in primarily oxygen-filled atmospheres, only in radiation permeated gas, although they appear to have adapted to breathe in radiation free atmospheres during or before the Bolar War.

The Gamilons have a massive fleet, though their fleet lacks heavier ships. The most common vessel in their fleet is the Gamilon Destroyer (image below). The Gamilon Navy's main tactic is to simply overwhelm their enemy with sheer numbers of these destroyers. Gamilon Command Ships are equipped with their ultimate weapon, the Desslok Cannon. The Desslok Cannon is an extremely powerful laser capable of vaporizing almost any ship it hits.

A movie was made in Japan in 2010 based on the animated series, using the Japanese name for the series. In Space Battleship Yamato, the Gamilons are not individual, but share one consciousness. They are also much less human like, as 70s era aliens tended to be more human in appearance.

Retrieved from "https://aliens.fandom.com/wiki/Gamilon?oldid=187236"
Community content is available under CC-BY-SA unless otherwise noted.